Shorter Term Spring 2021 Classes are still open for registration, with online and on-campus options, including expanded Hybrid offerings, with class size limits and COVID-19 safety measures in place. View more details & FAQ. To support Spring Term, select services are available on campus, with prior appointments required in most cases and facial coverings and social distancing requirements in place. See the Student Services Guide.

A Look Back: Essays by Dr. James A. Drake

Eastern Florida State College is celebrating its 60th anniversary this year as a leader in Florida higher education, serving students and the Space Coast community.

The college will mark the occasion with campus and community events, plus through a series of monthly essays written by former college president Dr. James Drake.

The college was founded in 1960 as Brevard Junior College with the first students and faculty members meeting in the old Cocoa High School building, since demolished.

A key factor in its inception was the dawn of the Space Age and helping train workers for NASA and the Mercury, Gemini and Apollo programs.

Also established in 1960 was Carver Junior College, another two-year institution that provided educational opportunities to African-American residents of Brevard County.

In 1963, the two schools integrated and moved to 87 acres adjacent to Clear Lake in Cocoa, the present site of the Cocoa Campus. 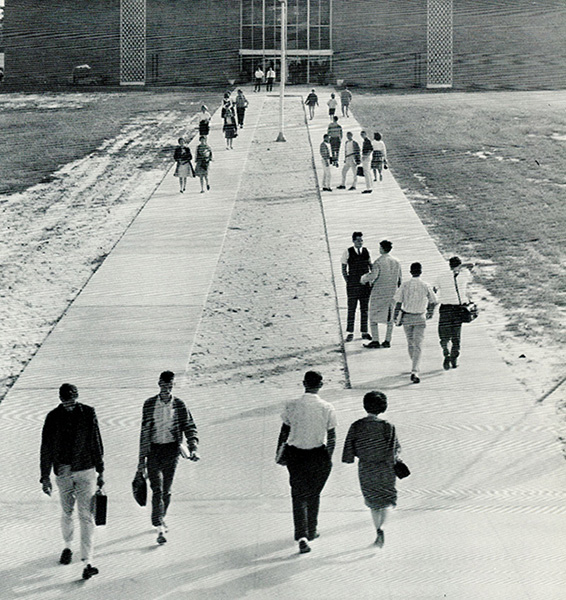 Students walk to class in 1965 shortly after Brevard Junior College moved to an 87-acre site on the shores of Clear Lake in Cocoa, still the Cocoa home of EFSC today.

“The college has been known by several names since 1960 but our mission has remained the same in providing students an excellent education that can lead to great careers,” said college President Dr. Jim Richey.

“That commitment is shown every day by our faculty and staff who do everything possible to help students succeed and build productive lives.

“We’re honored to serve them and all the residents of the Space Coast. Our celebration is the community’s celebration as well.”

The college was renamed Brevard Community College in 1970 when the state of Florida created a system of two-year colleges.

It became Eastern Florida State College in 2013 when it began offering Bachelor’s Degrees for the first time in its history.

More than 120,000 students have earned their degrees since the first classes were held six decades ago.

Today, about 20,000 students annually attend classes on the four campuses and via Eastern Florida Online.